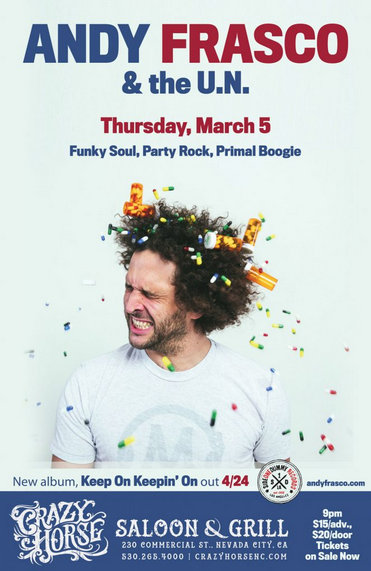 by Andy Frasco & The UN

Andy Frasco & The U.N.
Crazy Horse Saloon
Nevada City, CA
05-MARCH-2020
18-JUNE-2020 Update: I came across this great review of the show and some YouTube videos of the mayhem. Enjoy!
http://crazyhorsenc.com/andy-frasco-nothing-to-be-afraid-of/
Recorded By: RasBobre
https://www.facebook.com/rasbobrerecordings/
https://archive.org/details/@rasbobre

“We’re going through a mental health crisis right now,” says Andy Frasco. “Loneliness, depression, suicide, it’s all on the rise. When you’re struggling in the moment, it can feel like you’re the only one, but that’s just not the truth. I wanted to make a record to remind you that you’re not alone.”

It makes sense, then, that Frasco’s rousing new LP, ‘Keep On Keepin’ On,’ lands somewhere between an emotionally raw therapy session and a raucous, rowdy house party. Produced in part by Widespread Panic’s Dave Schools and in part by former Awolnation keyboardist Kenny Carkeet, the collection finds Frasco digging deeper than he’s ever dug before, fusing ecstatic rock and soul with infectious pop and funk as he grapples with the kind of demons he’s spent the better part of his adult life running from. The songs here are blunt in their honesty and unsparing in their self-examination, but they remain, at their core, works of great hope and promise, equal parts self-help mantra and sing-along celebration.

“I wanted to approach suffering with optimism on this record,” he explains. “I’m not the kind of guy to sit there and drown in my sorrows; I’m the kind of guy who wants to get out and fight for my happiness. Change is possible if you’re willing to do the work.”

Frasco has never been one to shy away from work. Born and raised in California, he built his audience the old fashioned way, crisscrossing the world performing hundreds of exhilarating shows each year with his ever-evolving band, The U.N. Since its inception, the group has released a series of acclaimed records, shared bills with the likes of Leon Russell, Galactic, Gary Clark, Jr., The Revivalists, and Marcus King among others, and slayed festival stages everywhere from Mountain Jam in the U.S. to Rock am Ring in Germany and COTAI Jazz & Blues in China (this summer, they’ll appear at both Bonnaroo and FloydFest). NME hailed Frasco and his bandmates as “party-starting touring stalwarts,” while Relix praised their “raucous energy,” and Clash lauded their live show as a “nightly high-octane experience that doubles as a celebration of life and music…energized by a powerfully entertaining multi-cultural soundtrack that will shake the foundations of all nearby structures.”

On top of his manic schedule as one of the hardest touring musicians working today, Frasco also hosts ‘Andy Frasco’s World Saving Podcast,’ which features conversations with musicians, comedians, and actors about life on the road, the creative process, and mental health.

Uploaded by RasBobre Recordings on March 11, 2020